Our post this week goes out to an unsung YouTube Hero by the name of datasnille, who 7 years ago posted a quick self-made lyrics video for the song "Absolutely."

If you were born during or before 1990, you may remember this song as the heartfelt pop-rock anthem that memorably begins with the lyrics "This isssss the story of a girl / who cried a river and drowned the whole world!"

If you've joined us more recently, cosmically speaking, all you really need to know for right now is the song was a minor smash in the year 2000, reaching No. 6 on the Billboard Hot 100 and being included amongst the elite ranks of NSYNC and Jessica Simpson on Now That's What I Call Music Vol. 5 (a popular compilation compact disc series which cherry-picks chart-topping hits as a way to squeeze extra coin out of the current season's hottest jams).

Indeed, datasnille got the artist wrong. "Absolutely (Story of a Girl)" is in fact by the Long Island, NY group Nine Days. And it's pretty much their only hit ever.

But this oversight is made even sweeter by the fact that YouTube itself correctly attributed the song to Nine Days in its "song tag" below the video:

So how has datasnille reacted to almost 7 years of an incorrect citation? What have they done to correct the problem?

And that's why we're honoring datasnille this week. Whether or not they originally set out to troll an extremely small section of YouTube users, they are now fully succeeding. Here's how many views the video has:

And here's how people are feeling about it, overall:

This week, we stand with the 7,913 who could care less if datasnille got the artist right. I'm willing to bet a significant portion of those thumbs-uppers are fully aware of the problem and are enjoying how irked the other users are (Yours Truly included in this category).

As a reminder, here's a graph that sums up how datasnille has handled the situation: 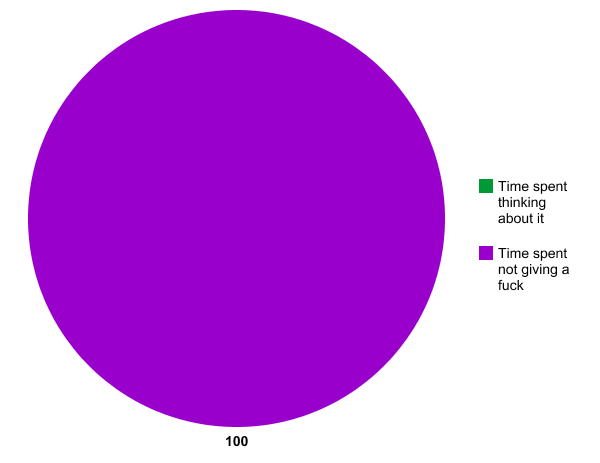 Hats off to you, datasnille. Keep rocking.